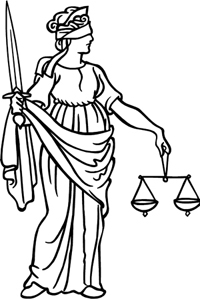 The symbol of a blindfolded woman holding a scale and a sword is commonly associated with true justice. The blindfold represents impartiality, the scale represents the weight of evidence, and the sword represents punishment. The Sixth Amendment to the Constitution guarantees the right to a fair trial. For a trial to be fair it must be based on facts and hard evidence.

But what good are symbols and guarantees when any of these principles are compromised? The Oxford Dictionaries 2016 word of the year is post-truth defined as:

‘in this era of post-truth politics, it’s easy to cherry-pick data and come to whatever conclusion you desire’

There was a time in the United States when truth, honesty, fairness and facts were held in high esteem. Jack Webb, the star of the television series Dragnet was noted for his statement; “just the facts ma’am.” Children were taught to tell the truth or pay the consequences. It was common for deals to be sealed with a hand-shake. Obviously this was not universally true but these principles were considered to be core values of the American people.

The basis of these beliefs was the Bible. In spite of the wails from the progressive left this country was founded based on Judeo-Christian principles. The Bill of Rights, the Constitution and the writings of the founders bear this out.

There were two movements that started in the 1960’s that would forever change the face of America; the Civil Rights Movement and the anti-war movement. Both were based on the premise that the American system of government was fundamentally flawed. The real underlying question was; “Is the system flawed or is it the way the system is interpreted and managed that is flawed?”

Dr. King understood that the American principle of “liberty and justice for all” was not the issue. The abuses of segregation were a reflection of attitudes, hatred, prejudice, greed and a host of other things associated with the human condition. It was a human condition, not a system issue.

The anti-war movement was similar in nature. America was pursuing an idealistic goal of ridding the world of Communism and sacrificing thousands of American lives in the process. The defenders of freedom are sworn to defend the United States against “enemies foreign and domestic” but nowhere are we tasked to be the world’s policeman. It was an extreme stretch to say that Vietnam was in any way associated with defending the homeland.

The civil rights movement enjoyed some success even with the death of Dr. King. Most Americans welcomed the change, some grudgingly, while others continued to resist. But over the years the movement was hijacked by leaders who saw an opportunity to gain recognition and wealth. Enter Jesse Jackson and Al Sharpton and their followers. Their goal was to keep racism alive at all costs to ensure their place in history. The movement descended into the madness of the current day.

The anti-war movement devolved from legitimate concerns to a free-for-all abandonment of Judeo-Christian morals and precepts. It was a switch from individual and corporate responsibility and integrity to a drug induced trip to never-never land where everything was free and individual gratification was the only goal.

The election of Donald Trump as President of the United States sent shock waves around the world but especially through the progressive movement. They were on a reckless joy ride that was tearing up the Constitution and tearing apart the nation. For the record, progressivism is nothing more than a toxic mix of fascism, socialism, and communism. Obama kept his promise to fundamentally remake the country which he did after his own image and in the image imposed by his handlers.

Societal mores have to be based on a well-defined standard if there is to be an ordered society. The fallout of the 1960’s resulted in an abandonment of traditional values on a national scale. Hence the post-truth era where personal opinion and self-gratification are themselves the defining morality. It is a personal issue, not a system issue.

When a society abandons its core values the only things remaining are chaos, lawlessness, anarchy, and ultimately tyranny. The United States of America is very close to the tipping point. President Trump has some noble howbeit lofty goals for America. We as a people are not united. The forces bent on tearing our country apart are hard at work. What will it take to move from the tyranny of personal opinion back to truth and justice? The answer to this question will define our future, both individually and corporately.